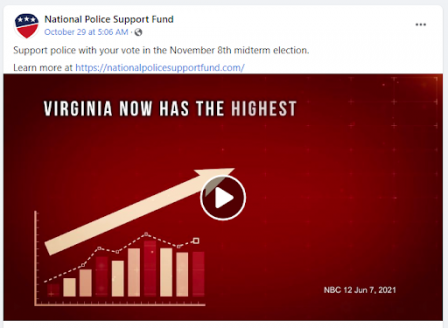 ALEXANDRIA, Va. - Virginir -- National Police Support Fund and United Police Fund came together this November to urge Northern Virginians to get out the vote in support of pro-police candidates. This joint project focused on over 62,000 conservative, pro-law enforcement voters, drastically increasing midterm election turnout that was vital in the election of conservative candidates in Virginia at the local level to U.S. Congress.

These midterm elections were extremely important in the fight against anti-police political rhetoric, especially in Virginia. Virginia's crime rate is the highest it's been in over 20 years, and this disturbing trend was the main focus of the organization's efforts in the state's midterm elections.

In the weeks leading up to the election, the joint voter outreach program reached over 62,000 voters  who don't historically turnout for midterm elections and encouraged turnout due to crime and police issues across Northern Virginia, with special attention to ( note areas of the state) VA Beach & NOVA . The organizations reached out to voters through multiple channels, including a billboard advertisement, social media ads, and more. On Facebook alone, they were able to reach over 246,000 profiles.

More on virginir.com
For example, Jen Kiggins won her race for Congressional District 02 by just more than 10,000 votes, showing just how important it is for citizens to get out and vote! "It's clear that these conservative and pro-police voters really matter! In this race and in so many others throughout the country, on November 8th voters voted "Yes!" for law and order candidates," the Executive Director of National Police Support Fund commented.

National Police Support Fund is a grassroots political organization that is committed to aligning the interests and needs of police officers with the public's issues and concerns within the national political process.Their movement is comprised of tens of thousands of Americans from all walks of life who are joined together by their common respect for the rule of law and united in their support for the police officers who put their lives on the line every day in their communities.

For more information about the organization, visit www.nationalpolicesupportfund.com

The National Police Support Fund is a national political organization organized under Section 527 of the IRS Tax Code. Contributions are not tax deductible. Not authorized by any candidate or candidate's committee.