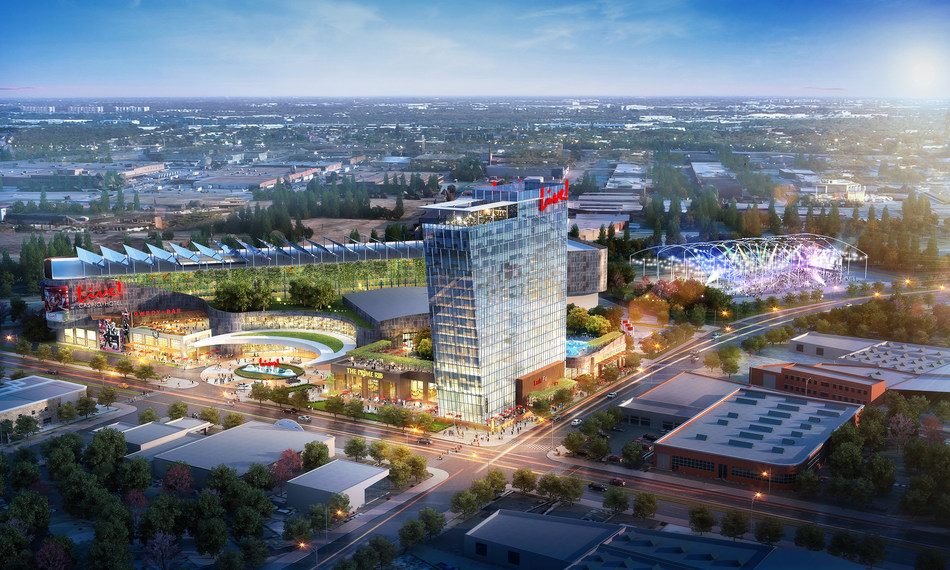 RICHMOND, Va., May 12, 2021 /PRNewswire/ -- The Cordish Companies announced today a historic achievement in providing opportunities for generational wealth building for Minority communities. The Company, along with its 50% Minority partnership team led by prominent Virginia businessman and Pro Football Hall of Fame legend, Bruce Smith, shared it has achieved $180 million in direct Minority investment for the proposed $600 million Live! Casino & Hotel Richmond resort. The Company will also be offering additional investment opportunities for small, Richmond-based Minority companies and individuals to participate in the project. With a combined $360 million of equity investment in the project, Live! will carry half the debt of the competing proposal and ensure the financial viability and success of the development.

"We are incredibly proud to announce this historic achievement today of $180 million of direct Minority investment in Live! Casino & Hotel Richmond, one of the largest, if not the largest Minority equity investment in the history of Virginia," stated Zed Smith, Chief Operating Officer of The Cordish Companies. "Our team of Minority equity partners represents a dynamic group of locally based and nationally recognized investors who share our passion and commitment to excellence and being a good community partner."

Live! Casino & Hotel Richmond's team of Minority equity partners includes prominent Virginians and Richmonders, former professional athletes and nationally recognized investors to position Live! as the strongest financial partner for the City of Richmond. Click here to view a video message.
"Our Minority partnership group is comprised of highly accomplished individuals from Virginia and across the country," stated Bruce Smith, Pro Football Hall of Famer and partner in Live! Casino & Hotel Richmond. "I have known and worked with The Cordish Companies for many years and nobody has a better track record of building and operating the highest-quality urban mixed-use and gaming resort properties in the country.  In fact, Cordish has developed three of the highest grossing casino entertainment resorts in the country.  Our partnership group, including my friends Emmitt Smith III, Billy McMullen, the Davis Family and others are all committed to not only making a significant financial investment in the City, but just importantly, investing our time and philanthropic efforts in lifting our communities in Richmond to new heights.  We are also excited about providing additional investment opportunities for small, Richmond-based minority companies and individuals to participate in the project on the exact same terms we and Cordish are investing."

More on virginir.com
"My roots are in Jackson Ward, specifically Gilpin Court. I went to school at Carver," said Billy McMullen, Former NFL Athlete and partner in Live! Casino & Hotel Richmond. "My grandmother, my father and my family lived through the destruction of Jackson Ward by the building of Highway 95. They had no say and no solution for their own community, a generation of equity destroyed. A few years ago, when I heard that the City of Richmond voted to allow a casino, I thought it would be a great opportunity for the community to be able to come up with their own solutions to critical problems through a fund from a portion of the casino revenue. Fast forward, the Cordish team has done just that. Live! Casino & Hotel Richmond will provide a community fund of $200 million in the first 15 years alone to important causes like education and affordable housing. What gets me excited is that this fund is run by active community members. Who better to answer the needs of the community than the community itself? I'm all about individual and community empowerment and I know the community has its own answers. The Cordish Team shares my philosophy, and they are committed to supporting that in every way from philanthropy to job creation."

The proposed project, located in the Scott's Addition entertainment district of the City, includes a Four Diamond, 300-room Live! Hotel, spa & wellness center, 18 dining and entertainment venues featuring local and regional favorites, a 4,000-capacity live music venue that will host national touring artists, 70,000 square feet of multi-use event space, an upscale casino and 5-acre Festival Lawn which will host community events, concerts and festivals.  The project will also include a new cinema and several thousand free parking spaces that will be available for customers to all businesses in the area.  With easy access off Interstates 64 and 95, the project's site is closer to the vast majority of the Richmond regional population than the competing site on the City's southside.

"We have choices about who we do business with and partner with," said Langston Davis, Jr. of Davis Brothers Construction Company, Inc. (DBCC) and partner in Live! Casino & Hotel Richmond.  "Without a doubt, the Live! team is the right choice for us and for Richmond. Their commitment to seek out investors who live and work in Richmond was very important to us. Cordish believes in being a partner in any city they do work in and their commitment to minority investment, job creation and community engagement is unmatched."

Live! is projected to maximize jobs, tax revenue and community benefits to the City of Richmond including a $200 million community benefits fund to support neighborhoods and non-profits. 8,000 jobs will be created by the resort, including 5,000 construction jobs and 3,000 permanent jobs with the highest employee compensation package of the remaining proposals. Live!'s average wages and benefits package is over $60,000 per year and no employee will earn less than a $15 per hour minimum wage. The workforce development initiatives include partnerships with the Virginia Hispanic Chamber of Commerce, Hispanic African American Alliance, Virginia Union University and area community colleges to ensure significant educational and workforce development opportunities for City residents facing unemployment or chronic underemployment.

"We support the Live! Casino & Hotel project due to The Cordish Companies' long-standing commitment to diversity and inclusion in all facets of its business and the Company's proven track record in delivering not only the highest quality developments over many decades, but its proven commitment to each of the communities in which it works. Talk is cheap and Cordish has shown it does what it says," explained Michel Zajur, President/CEO of the Virginia Hispanic Chamber of Commerce.

More on virginir.com
In addition to 50% Minority ownership in the project, Live! is committed to a minimum 40% Minority participation in the project's construction and robust participation in the ongoing operational spend on goods and services. The Company recently opened Live! Casino & Hotel Philadelphia, remaining steadfast in completing the project during the pandemic, safely keeping thousands of construction members at work and achieving 51% minority participation during construction. Additionally, the Company hired 2,000 new team members at this property during this critical time when unemployment had significantly increased, and well-paying jobs were needed most.