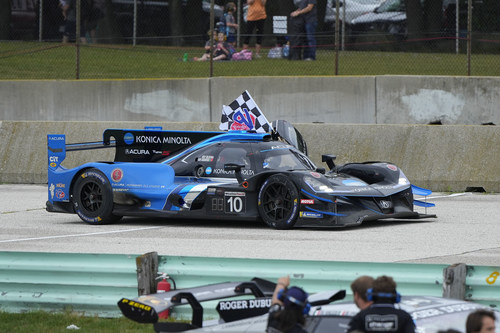 Battling fellow Acura team Meyer Shank Racing with drivers Tom Blomqvist and Oliver Jarvis for the race win and championship lead, Albuquerque in the #10 WTR ARX-05 pulled off a daring, two-wheels-in-the-grass pass on Jarvis in the #60 MSR Acura as both prototypes weaved their way through GTD traffic on the downhill run from Turn 3 to Turn 5.

The two Acuras, and a competing prototype from Chip Ganassi Racing, continued to battle for the race win into the closing laps of the two-hour, 40-minute contest – which was marked by frequently changing weather conditions.  With just a few minutes remaining, Jarvis lost control exiting the high-speed Road America "Kink" and made heavy contact with the inside wall.

With the caution flag waving for the final two laps, Albuquerque and co-driver Taylor went on to record their fourth victory of the season, while Jarvis was able to nurse his damaged MSR Acura home in fourth, despite heavy front end damage and a deflating left front tire.

With just one race remaining, Acura has unofficially clinched the 2022 IMSA DPi Manufacturers' Championship, and will formally claim the title when the field takes the green flag for the season finale at Road Atlanta in October.  Meanwhile, the drivers' and teams' titles will be decided between Meyer Shank Racing and Wayne Taylor Racing, with all other contenders also mathematically eliminated with the start at Road Atlanta.

In the production-based GTD class, the Rick Ware Racing team driver pairing of Ryan Eversely and Aidan Read attempted to run the race on just two pit stops, running as high as third in class at one point as a result, but needed to come in for a splash of fuel near the end of the race that dropped the pair to ninth at the finish.

Filipe Albuquerque (#10 Wayne Taylor Racing Acura ARX-05) Race winner: "What a crazy race. We started in first place and we led the first stint, and then the drizzle came. Ricky had a really tough time with a slick track and new, cold, slick tires. He did a hell of a job keeping the car on the track. We were almost last and were nearly lapped by the guys that took a gamble on rain tires, which was the right choice. At that point, our championship was completely over, but the beauty of IMSA and endurance racing is exactly this: it can shuffle unpredictably. I went back in the car even though I would've trusted Ricky to go to the end. I had driven in qualifying so I was confident, and it was dry again. We pushed again—maximum attack—dragging the championship fight to the last race. It came off perfectly for us. Another win, our fourth of the season is just brilliant. We set the goal to win. So far, so good."

Ricky Taylor (#10 Wayne Taylor Racing ARX-05) Race winner: "My job was to survive the conditions during my stint today. We were looking on for an Acura 1-2 towards the end, which was great and the strategy was strong. It's the first win for the #10 Konica Minolta Acura ARX-05 at Road America. Finally, crew member Bill Mullen got a [Road America] win after 36 years of coming here, so congratulations to him. On top of everything, that feels the best—Bill Mullen got his win. I can't say enough about Filipe's drive. Acura's been a force since coming into the DPi category. Winning the IMSA WeatherTech SportsCar Championship DPi Manufacturers title today is huge. They do such an amazing job. You can see it in the standings over the years. Looking at it from the outside, if you're going to join the championship, you should get an Acura. They give us such reliable cars and the car has been lightning fast for five years. We're proud to represent the brand, and to effectively clinch that championship today—hats off to everyone at Acura, HPD and American Honda."

More on virginir.com
Lee Niffenegger (HPD IMSA Program Manager) On Sunday's Acura win at Road America: "Congratulations to everyone at HPD and our Acura Motorsports teams on a great day. Wayne Taylor Racing won for the very first time at Road America—the last of the current IMSA tracks for them to take a victory at. With a start at Petit Le Mans, Acura will win the Manufacturers' Championship in 2022. It's a massive achievement that everyone has worked so hard for. And, additionally, our Wayne Taylor and Meyer Shank Racing teams will have the chance to battle it out for the Team and Driver titles."

The GT classes of the IMSA WeatherTech SportsCar Championship, GTD Pro and GTD, travel next to VIRginia International Raceway in Danville, Va., for the August 26-28 Michelin GT Challenge at VIR.